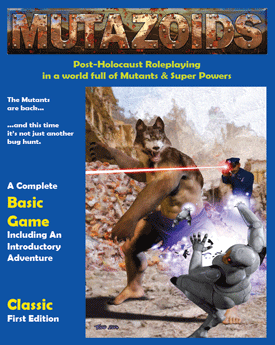 Mutazoids Classic First Edition (1.1) is a reproduction of the original game with new art and errata.

It is the year 2073, sixty years after the world was swept by the accidental release of the man-made Plague virus. Society's collapse was a brief one. Brief, because the survivors remembered the luxuries of the early Twenty-first century and wanted them back.

The world was different after the Plague. Many of the children were twisted and deformed. Mutants. Out of this situation, the paranoid and hateful rose to power by using force and lies to terrify the confused. As the years passed on, those mutants who did not die in their youth were growing to maturity. The Second Republic, the subtly cruel post-Plague government in what was once the United States of America, publicly divided the mutants into two groups: the Acceptables, those with only minor deformities; and the Mutazoids, creatures of barely human appearance. There is also a third group whose existence is officially denied by the Second Republic, sometimes called Supers, who resemble normal humans but have extraordinary powers.