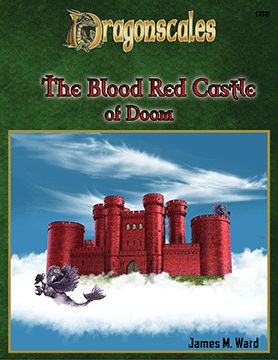 In the sky above Concord, a huge cloud with a red castle appears. Suddenly, strange purple dragons descend from the floating castle at lightning speed. Their talons reaching out to grab helpless watchers from the Bridge of the Gods. Screams of pain and horror can be heard throughout the city.

Something needs to be done!
◊
A brave and powerful group of adventurers will need to enter the enchanted castle, battle evil undead creatures, and find the heart and power that fuels the evil within.

Dragonscales is a new Fantasy Roleplaying game from James M. Ward and Stephen A. Lee