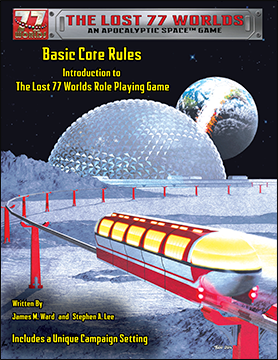 Written by James M. Ward and Stephen A. Lee

Softcover in B&W Text
Sold Individually but is also included in the Basic Box Set.

Have you wondered what it would be like questing at the order of the Pharaoh of Egypt? Have you imagined helping King Arthur slay the dragon giving Camelot trouble? Have you thought about helping Elliot Ness shut down Al Capone’s alcohol speakeasy?

Picking up this Basic Set is the first step in having the great fun of doing all of those adventures. APOCALYPTIC SPACE is a role-playing game with lots of differences. Players use a deck of cards to enhance their role-playing experience. The draw of a heart strikes your enemy. Drawing a diamond allows you to figure out a complex ancient device. A high club allows you to do feats of dexterity. A spade draw defends you from damage in combat.

Characters begin their adventures on the moon after a deadly alien attack on the solar systems was stopped by unknown forces. Unknown to the characters, three hundred years ago vast alien armadas attacked all of the 77 worlds settled by mankind. The powerful defenses of mankind were blasted and each planet was destroyed from space. Special battle cruisers controlled by Artificial Intelligences retreated from all of those worlds and came back to lead a last defense of Earth. They came too late to the solar system and found Earth Prime in ruins.

In those times the moon was a tourist area. An exotic resort destination for people from all the colony worlds. Three huge domes were vacationing spots for people wanting to enjoy the cultures of Ancient Egypt, King Arthur’s Camelot, and Chicago of the Roaring Twenties.

The Basic Set teaches you how to generate a character. Then characters adventure and gain ranks and abilities as they move from dome to dome. Eventually, they discover the means to leave the moon and explore blasted Earth Prime.