A Walk Around Concord 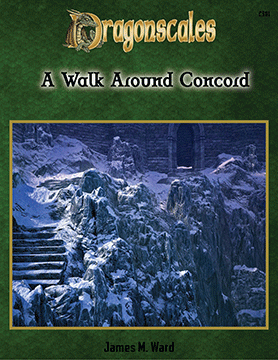 A Walk Around Concord

You have grown up in the green mountains near the enchanted city of Concord in the Chromatic Kingdoms. Concord is the only city where dragons, humans, and dwarves live in peace. The city sits astride a vast canyon that cuts deeply into the mountains and at its bottom is the ruin of a half-empty city where the last of a dwarf’s clan makes its home.

Concord exists on both sides of the canyon. At its heart are several huge natural stone bridges some 3 miles wide. The stone towers on either side of these bridges are where the rich and famous inhabitants live. Dragons live in huge warrens on the north side of the city past its walls. Ancient under-city catacombs stretch deeply into the canyon sides and the mountains below.

You are paying your first visit to Concord. You have heard all the stories. You know if you fight with a dragon the gods will turn you into dust. There is no fighting in the city, but brawling is allowed.

The fantasy city is divided in half by a huge canyon, miles deep and wide and many miles long extending north and south of the city. There are several very stable stone bridges spanning the canyon. The main bridge is called the Bridge of Gods and several times in the city’s history deities have come down to do battle on that bridge with massive creatures coming out of the depths of the canyon to fight them. That bridge is three miles wide and 16 miles long. It’s made of solid granite. The brightest and most wealthy people live in high towers on either side of the Bridge of Gods. These towers can be seen from anywhere in the city.

Dragonscales is a new Fantasy Roleplaying game from James M. Ward and Stephen A. Lee