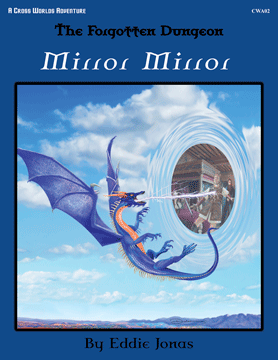 87 Pages including four level maps and an Encounter Encyclopedia

The forgotten dungeon was ancient. In Mirror Mirror, the party is transported back in time or to an alternate reality where the Dungeon is new. This time, the encounters are different and the adventure is far more challenging.

Mirror Mirror is a rare challenge for players who have grown reliant on magic and other tools of their trade. Your players will have different opportunities to think on their feet and practice often neglected combat techniques. In the Mirror Mirror version of The Forgotten Dungeon, players will have a greater chance at finding/earning items to cherish, magical and otherwise. This adventure might be considered an exercise for character development.

The party members will be encouraged to join the other slaves who are artisans and working on sculpture and metalworking, eating together, bathing, sleeping, their routine. These workers are craftsmen and have traded their lives to better their families, left behind, or traded their lives to extinguish debt, or to save their lives from otherwise painful deaths after crimes committed. Some few are wards of the state and their servitude is repayment for being allowed to live, for being fed, for having housing. They all have come to accept their trade in life and are generally loyal. Their years of service and loyalty are marked on their body in different ways, from golden piercings to embedded gems, infused to their skin in some idea of ornamentation. Upon their deaths, these slaves are crushed, dried, and used as fuel for the forge fires. Fused gems are harvested, as they hold special power and are prized by mages…

The Forgotten Dungeon is a traditional adventure that incorporates legendary artists from the days of TSR.

This is a challenging crossover adventure module designed to work with most traditional Fantasy RPG game systems as well as the Lost 77 Worlds Apocalyptic RPG and Dragonscales Fantasy RPG by James M. Ward & Stephen A. Lee.

An Adventure for AD&D, D&D 5e, Dragonscales & the Lost 77 Worlds
A mid-level adventure for 4 to 6 characters of 8th level or 3rd Rank