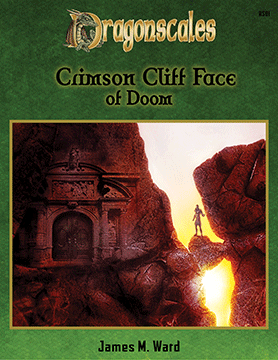 Each step is exactly like another. They are ten feet wide and a foot deep. Each is cut into the stony wall of the cliff, ignoring all of the physical features of the cliff. The steps track back and forth beside the hundreds of yards of shear cliffs. Rock falls have happened in the thousand years since the steps were cut, but never onto the stairs of the cliff. Along the thousands of steps of the stairs are cave opening every hundred yards or so. Sometimes new cave openings appear and at other times openings collapse. Winter can be a little harsh, but snow or ice never collects on the steps for more than an hour even in the worst storms.

Usually a squad of five military troopers (all fang warriors) guards the top of the steps into the city proper on both the west and east side of the cliffs. The last two nights the guards have been eaten. Now, no one wants to guard the steps and the city officials want them especially guarded.

At the bottom of the canyon, where the stairs end, there are the ruins of a dwarf city thousands of years old. Few people go down there as the ruins are filled with dangers of all types. However, huge treasures have been found in those ruins, which encourages others. The dwarves that still live in the city do not like nondwarf intruders and can be quite harsh on them.